Showing posts from December, 2011
Show all

Ho-ho-ho-liday Lunch is my favorite lunch of the year!!! 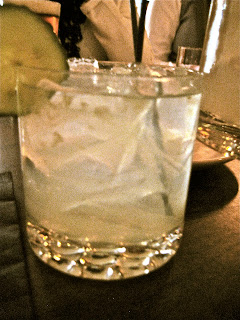 I should be home right now, sleeping this off:

If you didn't know, I work for an independent cookbook publisher in the South End. This means we don't go just any old place for lunch.

We go to AWESOME DELICIOUS places for lunch!! Did you know that The Gallows is open for lunch? Oh yes they are, Thursday through Saturday. Totally worth it.

Thanks boss*, for the really great holiday lunch. I know we all quite enjoyed ourselves today.


*For the record, it makes the boss bats when I call him boss. Ergo I must call him boss. Can't help it, it's how I roll.
Post a Comment
Keep reading.... 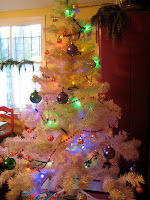 Whatever holiday you choose to celebrate, I hope it is a lovely one.
Post a Comment
Keep reading.... 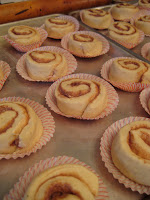 I finally, FINALLY, got around to making those Swedish cinnamon rolls ("kanelbullar") that I have been so obsessed with lately.

It was totally worth the effort. I used this recipe from the Scandinavian Kitchen which is a shop over in London because a) the recipe is in English, and b) the measurements are metric. Also partly because the recipe called for fresh yeast which I prefer for no other reason than that I love the texture.

If you have trouble with the measurements, try the converter at Food.com but also keep in mind that most kitchen scales have an option to measure in grams and most measuring cups have milliliter (ml) marks on the opposite side of the cup marks. Lastly, the recipe tells you to bake them at 220 degrees - this is not the Fahrenheit number. You want to cook them at 425F and in my oven it took about 12 - 15 minutes to get them to the lovely golden color.

As for using fresh yeast, well I love it. I was introduced to it years and years ago when I worked at …
Post a Comment
Keep reading....

Alone, in the kitchen, with a fruitcake 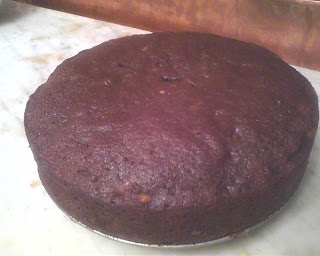 I am recipe testing a fruitcake recipe for a friend.

Let me tell you that admitting to liking fruitcake is akin to admitting that you smoke crack twice a day and have a bottle of Hot Damn for breakfast.

No one ever believes it.

And if they do, they pity you. Love for fruitcake is the love that dare not show its face, it is the butt of every cake joke, the JuJube of the cake world, you get the point.

So when a fellow fruitcaker asked me to test out a fruitcake recipe I jumped on it like white on rice. And then I waited two weeks to make the damn thing.

Sometimes I wonder what the heck I am thinking.

Anyway, I think the recipe is a smashing recipe! Well it looks beautiful anyway. I am supposed to wait an hour before I can cut into it and use that hour to saturate it with bourbon cherry bounce. 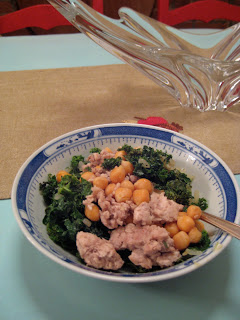 I love kale. For the longest time I thought chard was kale and I do not like chard.

Personally I think that this is true for a bunch of people. Between that and the fact that most people think of kale as the limp bit of greenery under the dried up slice of orange that is the garnish on a million diner breakfasts, I can see why so many of my friends are like "eh, meh, kale".

But let me tell you, kale is DELICIOUS. I am convinced it is what Grimm intended for Rapunzel to crave like mad, only the word "rapunzel" was more exotic than the word "kale".

Here is the excerpt from the Grimm story of Rapunzel:

Through the small rear window of these people's house they could see into a splendid garden that was filled with the most beautiful flowers and herbs. The garden was surrounded by a high wall, and no one dared enter, because it belonged to a sorceress who possessed great power and was feared by everyone.
One day the woman was standing at this window, and sh…
2 comments
Keep reading.... 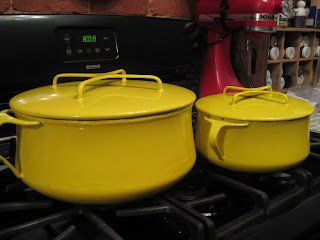 Look what I inherited from La Mamma!

These are the most versatile pots. Before scoring a maslin pan for short money, I used the big one for making jam. I use it for making soup and stew and pasta sauce. The nice thing is is that it can go from the stovetop to the oven to the table. I've made casseroles in it and it works beautifully.

It also doesn't hurt that I find them really good looking. Probably because I am going through a phase of loving all things Scandinavian.


PS: The minute I buy reindeer jerky is the minute before I need an intervention.
Post a Comment
Keep reading....

Somedays it's just better to stay in bed and today was one of those kinds of days for me.

For the record, I am completely ignorant when it comes to computers and networks and megabytes per second and subnets and proxies and firewalls.

Which means that three days of trying to straighten out sh*tty, sloooooooow internet service at the office is about the same as taking an immersion class in Russian for three days straight. With a 87 year old teacher who has a big old beard and who mumbles.

I am pooped and confused.

I want something small, sweet, and delicious for dinner. I want affogato.

A simple supper, that is exactly what I need. And a hot bath. And for it to be Friday.

Don't get me wrong, I am all for people opening new business, but I just don't get this "old timey is the now/new timey" stuff.

The idea of a pre-Prohibition saloon that serves housemade Pork Belly Rye Whiskey and Ploughman's Platters and classic meat pies makes me wonder if the staff is also ol' timey - chaps with sideburns and suspenders and sleeve clips and ladies with rock-a-billy clothing and artful tats. Only because I feel like I have seen this done before. more than once, in real life and you know, in the history books.

If I sound sort of cynical, I am. This kind of carefully "curated" atmosphere makes me think of Plimouth Plantation. Pubbing as a sort of living museum experience.

Honestly I would not want to go back into the past, to pre-Prohibition. Firstly I never have…
Post a Comment
Keep reading....

Not a Scandinavian bone in my body...

I am pretty sure that there is nothing far northern European about me, except for being white, that can explain my sudden love of all things Scandinavian. It's borderline creepy. I haven't even BEEN there which sort of makes this obsession a little weird.
Anyhoo, it seems that in Sweden there is this thing called "fika" which seems to be a coffee break, the real kind of coffee break. I am not entirely positive, as I've never been to Sweden nor do I speak Swedish, but the translation is that you take a break with coffee and a treat. Yes please! Let's fika!
I am bored to death of the desultory coffee mug that sits lamely on my desk going cool. I want to have a proper coffee break with friends and kanelbullar! Seriously, that would definitely make the day go a little better! Sadly in the US this sort of thing would be tough to start. Everyone is so busy being busy (or hoping to be seen as being busy) that taking a break to chill and have coffee would be mistak…
Post a Comment
Keep reading....
More posts