Showing posts from January, 2010
Show all

Temporary Leave of my Senses

January 25, 2010
So where I have been is renovating my house. A plan that was clearly hatched while my rational sense was on Christmas break. And by "renovating" I mean "making a big mess". Why do this? Oh, because why not - right? And because I read Katy Elliots blog one too many times. This project so far has entailed me packing up all my stuff & putting it in the basement, moving myself into my guest room, and basically gutting every room. GAH! Thankfully I have a fantastic foreman on the job who kicks my ass when I slack off. And in an effort to perhaps get yet MORE work done after my regular work, I gave her my computer in an attempt to not couch flop and surf all night. Which is why I am currently staying late and posting this, so I can go home and get back to work. My house better effing rock SO hard after this!!!! I will post some pictures of the kitchen so you can really appreciate the job I am facing!
1 comment
Keep reading.... 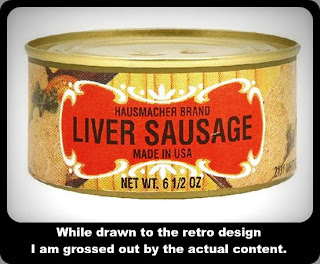 And by fancy food I mean the opposite of that. All the foods below, as well as the liver sausage and curry powder above, are available for sale on Amazon.com - believe it or not, there is very little NOT for sale on that site. It's incredible really and I can't stop staring. .. One thing that seems to be quite popular are foods that taste like other foods. Not in the crazy genetically modified way where a strawberry tastes like flounder but in the regular way where all the natural flavor is sucked out and replaced with a chemical replica of an entirely other flavor. Frankly this amazin' packaging reminds me of something I would have really wanted to have in my lunchbox.... back in 6th grade. In the eighties. When claymation California raisins swept the nation. And Cabbage Patch Kids ruled the world. Oh, ok, I am back. Up next... Personally I love cherries and I will also confess to a secret love for maraschino cherries. So naturally I am drawn to these
2 comments
Keep reading.... 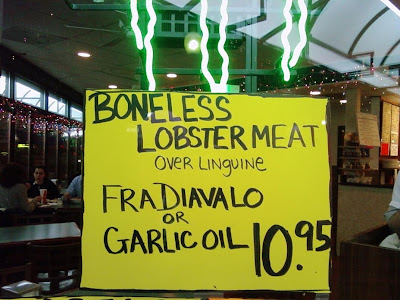 January 09, 2010
BACON! And lots of it. The other night I was burrowing into my lovely fleece sheets and I thought I caught a whiff of bacon. And not because I farted under the sheets but rather the sheets sort of smelled like bacon. I sniffed and sniffed and sniffed because my sense of smell is for crap and I kept thinking to myself "what is that smell" since I was positive it wasn't a fart. I poked my head out of under the sheets and sniffed the pillows, and the wall, and the bathrobe hanging on the hook... yep BACON! My whole room, including my pyjamas, smelled like bacon. Seems that my neighbors had a bacon party. Their exhaust runs along their kitchen ceiling which puts it at the base of my guest bedroom where I am currently camping out while doing some home renovations. Which is fine with me since I love bacon. I just wish I'd been invited to the bacon party.
1 comment
Keep reading....

January 02, 2010
Two things about food I have realized over the past two weeks. One: I need to eat food at mealtimes. When I am left to my own devices I lack food structure, among other things. For example today I didn't eat until about 1pm even though I was up at 8:30am. I ate some spoonfuls of vegetarian chili and drank half a pot of coffee. Then I had an Emergen-C. Later on I ate a slice of carrot cake, and then I made bread because I was too lazy to go out to get some. While the bread was rising, I tried to make panisse with a new recipe, which was a failure. I ended up frying chickpea paste in too much olive oil until it was brown and crispy on the outside and sort of pasty on the inside. Yuck/yum/fail. Once the bread was baked and cooled I cut a couple of slices and ate them with a smear of boursin and, get this, topped with sauteed kale and mushrooms. And then to finish the day I had a big cup of peppermint hot cocoa with marshmallows. This is why I need to go back to work. For meal st
2 comments
Keep reading....

Don't worry, I'm not starving. Yet.

January 01, 2010
Phew! 2009 was quite the year. And it ended with me going from one job to another with a convenient two week holiday in between. So you know, I could have gone on a tropical holiday. Or on an eating tour. Or just rented a bunch of movies and flopped out on the couch. But noooooooooo. I decided to do some "work" on the old homestead. Let me explain about that: it's like when you have a little tiny thread hanging out at the end of your sweater sleeve and you give it a light tug and suddenly your whole sweater unravels and you are standing there nekkid with a pile of yarn at your feet. Yeah. So I really thought I would just be caulking up a couple of windows and throwing down a little laminate. Haha. Currently I am camping out in my guest room, and last night I stayed in to insulate and caulk up the back exterior door. Whoot!! No one got presents this year because I am investing the last bits of my savings into caulking. Can you tell I inappropriate love the word '
Post a Comment
Keep reading....
More posts