April 16, 2017
In April when the temps rise above 40, everyone around these parts switches over to iced coffee with a childlike glee that summah is just around the cornah.

However when the temps rise to the 80's we all just complain. It's too soon for the beach, in a day or two the temps will drop back to the 40's, everyone is hot in their Easter dresses, it's too soon for A/C. We complain because we know that summah does NOT arrive in April, no matter how much global warming is happening, the possibility of a snow storm exists right through the end of the month.

But hey, it was Easter and it was hot so we grilled and drank cold drinks and ate cool desserts.

Sriracha grilled shrimp is literally one of my most favorite things to grill. If you are a recipe person, use this recipe from Food 52: Spicy Shrimp Recipe.

If you are a just-wing-it cook like me, you basically marinate peeled and deveined shrimp in a gloopy mess of olive oil, Sriracha, garlic, Worcestershire sauce, brown sugar, cilantro, lime, and salt for a couple of hours, then grill them, including the lime halves. Grilling the limes makes them super juicy, FYI.

This is a dish that everyone eats. Unless they are an alien. Aliens don't like spicy all that much.

Then there was a ham and some veg and stuff.

And then there was dessert which is obvs the most important meal of the day.  A lamb cake is required at Easter. If we don't have Easter Lamb Cake my French grandma will rise from the dead and... no I actually don't know what will happen if we don't have lamb cake at Easter, but it can't be good.

This year I made it with King Arthur Flour Gluten-Free yellow cake mix because both the Evil Twin and her Thing 2 have Celiacs and not letting them eat cake is not very French.

Also I made Julia Child's Crème Renversée au Caramel which I've been making my whole life since my Mom only made it on special occasions and she and I had wildly different idea of what a special occasion was, she said birthdays and holidays, I said Tuesdays and Thursdays.

I could probably make one in my sleep. Pro tip: don't try to get out of heating the milk or straining the frothy warm milk and egg mixture. 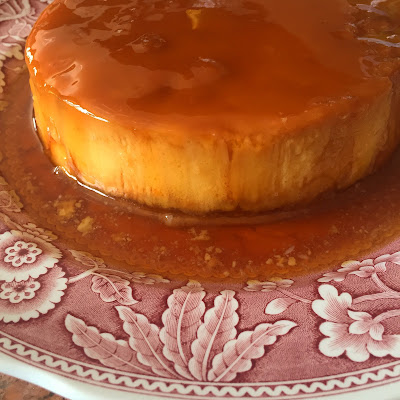 I could have taken a pic of the silky delicious interior, but I ate it all.

Here is to everyday being a special occasion.