Chicken Soup for the Canning Soul

Even though I have been cooking for survival lately - mostly to feed myself nightly - canning and other sorts of food preservation methods haven't been far from my mind.

I would like to get to a point where I make all the food I eat. Not knowing where my food comes from is something that is often on my mind, and not always in a positive way. Mostly I try to block out the truth, which frankly is not a terrific solution.

When I start thinking like this is when I start trawling the home canning and urban homesteading sites for inspiration. Right now my house is on its ear, but at some point it will be put back together again and then watch out because I will be a canning machine!!

In the meantime, to tide me over, I made home canned chicken soup. Let me just also say that I did a whole bunch of canning in the fall, and with the exception of the jam, I have eaten up almost everything, which is why I continue to can stuff.

So yes, home canned chicken. This was sort of a practice run. Which sounds far more dangerous than it actually was.

One suggestion was to put all the raw ingredients in the jars, including the chicken, fill with hot water, then process in the pressure canner for the appropriate time & pressure.

Which I will try one day, but I wanted something different for today. I wanted a chickeny chicken soup. A rich golden broth with chunks of chicken and veg that had a very chickeny taste to it. Not some pale chickenish water in a can.

I started by browning a small whole chicken in a stock pot. I added a couple of cut up carrots and onions, some whole peeled garlic, a few herbs, a couple of peppercorns, some stalks of celery, and cooked that up a little bit until nice and slick and browned. Then I added water until the chicken was covered and floating about just under the surface.

This simmered on the stove for about an hour and a half. Then I turned off the heat, let it cool, separated the stock from the chicken and veg, and put everything in the fridge until the next morning.

The next day I skimmed the clear chicken fat off the stock and picked the meat off the bird. Then I heated up a few spoonfuls of golden chicken fat and sauteed the chicken carcass in that. And boy did that ever smell delicious! After that cooked up a bit I added the stock to cover everything and let that simmer for a bit before straining out all the bones, chicken bits, and the little odds of peppercorn and thyme.

While the strained stock was simmering gently, I readied the jars. 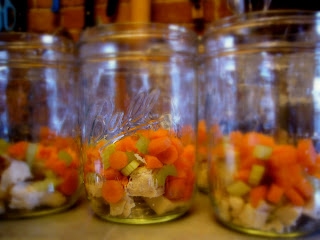 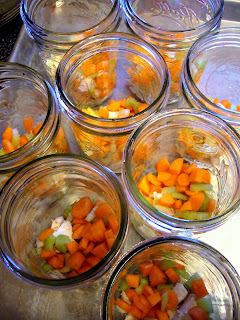 I chopped up a few raw carrots, a couple of stalks of celery, and the cooked chicken I'd picked off the carcass and added it to the jars.

Then I ladled in the hot stock. 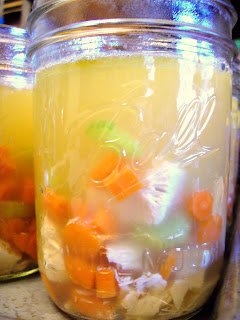 I wiped the lids, capped them with hot lids, screwed on the bands, and then put them in the canner.

Here is where things went wrong: I cooked them at 15 pounds of pressure for 75 minutes, but really I could have used less pressure. So while these will be perfectly safe to eat, they might be overcooked a little.

Eh well. Next time I will be sure to double check the weighted gauge twice! 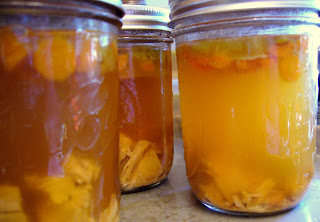 Typically I won't eat meat in a can, but since I put it there, I think this time I will.