December 21, 2010
Have you ever had a Crunchie? I love them and it is utterly pornographic to watch me eat one as I am one of those people who tries to eat it from the middle without getting the chocolate coating involved.
Alas, Crunchies are mostly unavailable in the good old you-ess-of-ay. So when you want one, you have to make it yourself.
Which turns out to be pretty fracking easy akshully.
Take a very large pan. And by large pan, I mean one that is bigger than what you think. 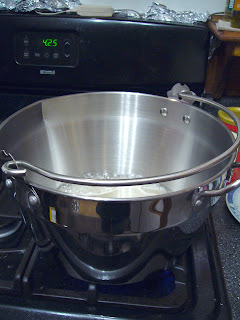 I used the maslin pan.
Combine honey, sugar, Karo syrup, and a little water in the pan and heat it up.
(I went with the recipe found here: Candy with a Crunch - Honeycomb Candy from the Seattlest via the Kitchn) 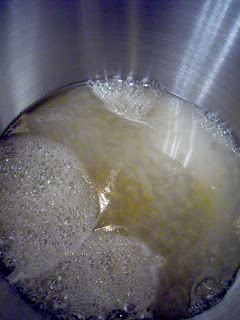 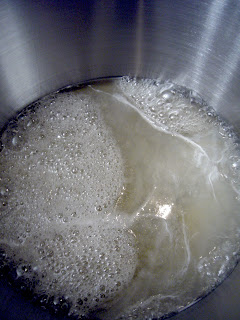 And boil
(it mixes itself!) 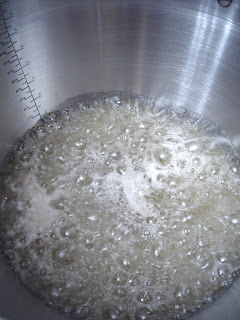 Until it is boiling furiously.
And then watch it until it turns light amber.
Ok so this is where I stopped taking photos because once the sugar starts to turn color, the distance between light amber and burnt was abouthisclose.

I pulled the pan from the heat and added the baking soda, stirred like mad, and the whole shebang foamed right up as described: 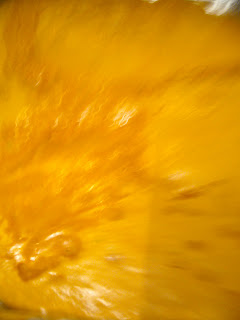 Foaming action shot. Mesmerizing!
Then I dumped the whole thing onto a lined & oiled sheet tray and waited for it to cool. 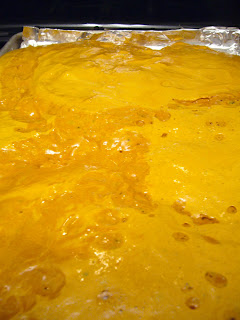 Looks a little like cheese huh.
Ok so this is the pot after just to give you an idea of how HIGH it will foam. Use a stock pot or plan on deep cleaning your stovetop, burners, floor..... 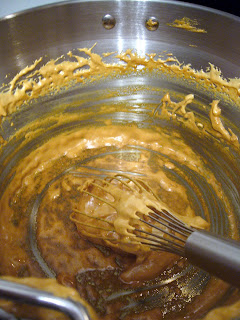 For some reason I was not at all able to saw/cut it with a serrated knife. It just shattered, but the shards were delicious! And coating them in chocolate was even more tasty.

Truth be told, I made two batches. The first one I cooked the sugar too long/dark. It wasn't awful, it tasted like burnt sugar which I secretly like. But that amount of burnt sugar was overwhelming and after a few chunks it made the roof of my mouth ache.

The second batch was miles better. And the nice thing is that the ingredient list is short and cheap (not the chocolate, but there is no waste there).

Anyway. I meant to give it away for Christmas but I ate it.