Liquor is delicious. So is liquor.

November 18, 2012
Sunday afternoon cooking is awesome up until 4:45pm, when the lovely long rays of afternoon sunshine that filter through the yellowing maple leaves suddenly switches to midnight blue and you still have a massive amount of washing up to do.

Today I am starting to prep the Thanksgiving meal. Usually I make the stuffing base early because I like all the flavors to meld together into mushroomy-buttery-garlicky- sagey deliciousness which I will combine with bread, turkey sausage, and broth on the Big Day.

And today I got to thinking about mushroom liquor. Did you know that oysters and clams also produce their own liquor? I knew it, but I never thought it out before. Recipes for both oyster stew and for clam chowder often instruct the cook to "reserve the liquor" and now I am thinking, other than mushrooms, what other veg produces a "liquor"? 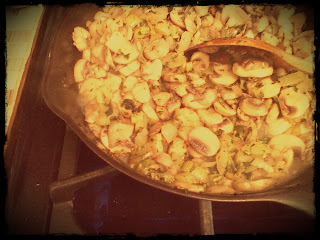 And for the record, mushroom liquor is DELICIOUS.