July 28, 2009
This weekend I went on a mini-break with the ol' Evil Twin, because frankly if it wasn't for her friends I wouldn't have any at all.

I love me some Martha's Vineyard. I am always equally glad to go there as I am to leave. And I always, ALWAYS, forget about the guys in pink pants. With the blazers and the parted hair and the cocktails at 5pm.

Off the island, I forget that exists.

But anyway we were there to visit with my sister's friend and her family - hereinafter known as "The Gazooki's".

Age Gazooki met us at the ferry. ET and I had hit the road a little before 6am that morning and were sort of punchy for food, since all we'd had by that point was a string cheese each.

Fortunately we were quickly whisked to the Art Cliff Diner, about a 7 second drive from the ferry in Vineyard Haven. 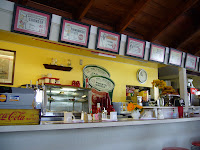 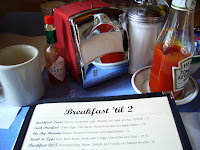 Funky interior and breakfast until 2pm 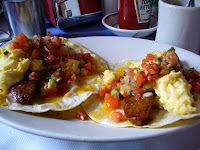 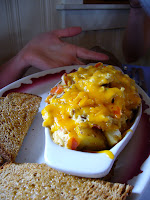 I had the breakfast (frickin' delicious) tacos
Evil Twin had, uh, some sort of frittatary thing 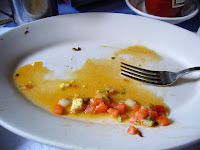 As always, a card carrying member of The Clean Plate Club
And as per usual I was done 20 minutes before everyone else
Am I embarrassed? No, not so much.
After that we went to the house to dump our gear and then walk into town for a lookey-loo before going to the beach in the afternoon.

Let me just tell you first about the host family. Quite easily one of the most fantastic families I have ever met in real life, "The Gazooki's" are friendly, warm, generous, and hilarious.

They were equally generous with food and cocktails - feeding a small army with complete ease the night we were there as though it were nothing. I was totally impressed with how tightly knit the family was in that they made everything look effortless.

Also this is the family that whenever an "adult" sent a "young 'un" to the shop for a paper or a loaf of bread or a pack of gum, it was always with a twenty dollar bill pulled from a pocket somewhere. It kind of cracked me up. Oh and also it made me feel 12 years old again.

So after the house we went for a stroll around Edgartown after which we went to the beach. I am not going to say too much about the beach thing because this is a food blog after all, but I will just say that Martha's Vineyard has seriously f*cked up weather. We went to South Beach expecting sun, since two miles over where we were was glorious. But no. South Beach was fogged in. We gave up after about 2 hours and went to a beach on the sunny side of the island. We got in a few fabulous hours in the sun and a couple of lovely swims before heading back to the house for dinner and drinks.

And here is the part about the drinks. And why there are no pictures of food or food related items after Art Cliff Diner.

Turns out that Dad Gazooki is a champ when it comes to making cocktails. He had a great big shaker that was apparently bottomless, which coupled with a day at the beach in the sun made me completely blottoed in minutes.

And although I ate enough to fill a pirates wooden leg, I was definitely not sober enough to remember to take pictures of the feast the Gazooki's laid out. Nor of the ice cream we went to get later that night at 10:30...

The next morning was sadly all about packing, and going to the beach for a few hours before the ferry.

Since I had Monday off, the Evil Twin and her boyfriend Trapper Keeper invited me to spend the night over in Dennis. So after the ferry landed back in Wood's Hole, off we went to Dennis.

Let me just throw in that we stopped at Grain & Vine to pick up some more beverage (never say die until the liver gives out) and if you are near Hyannis you ought to stop in. Lovely shop, lovely service and organic wine tasting on Sundays. Just go ok. Oh and from the looks of it, they might also offer delivery.

The only thing I was looking forward to at that point was a shower, a drink, and food. I had gone from the beach to the ferry and was smeared in a combination of SPF 30, SPF 50, and sand. Plus we hadn't really eaten that much during the day, except for a ferry burger ET and I split.

So when I heard that someone was making ribs for dinner, well, I nearly fainted.

We got to the house, I had a shower (it was an outdoor shower, the best kind ever) and was promptly given a cold glass of drink.

Heaven two nights in a row!

While the ribs were grilling, potato chips and onion dip magically appeared in front of me. It was like the food genie had magically granted all my wishes.

So the deal with the ribs is that Trapper Keepers good friend "Sleeves" has been dying to make ribs. He got a recipe from a mysterious source and periodically during the rib making process would disappear into the house to make a phone call to this aforementioned source.

Whatever. The ribs were fricking DELICIOUS. 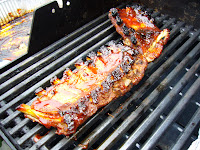 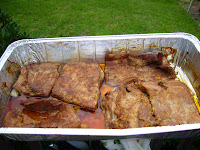 The baby back ribs, and waiting patiently to go on next are the St. Louis ribs. 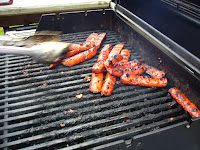 But first some turkeybasa.
Thank you Food Genie! 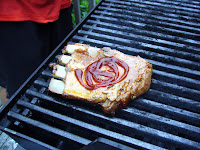 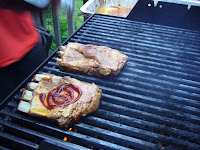 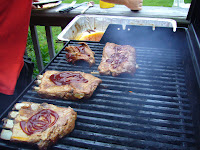 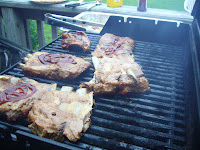 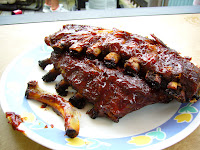 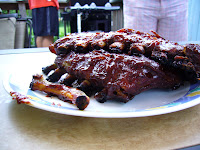 After a nice long bake, and a good time on the grill.... RIBS!!
With the ribs, "Sleeves" made baked veg for a side. I ate too many ribs to really fully enjoy the veg, but I recall that it was also very tasty. Uhh I think it was assorted veg (spinach, broccoli, peas, peppers, and onions?) baked with garlic, olive oil, a little butter, some Parmesan cheese, and I think crushed wheat thins. I am definitely making it sound weird, however trust me when I say it was very, very good.

The other reason there are no photos after the rib mess, is that I again drank a tiny wee bit more than I ought to have. But everyone was and I am a follower. So we were all drinking merrily along and I am pretty sure the night ended with "Sleeves" singing karaoke. Which I swear I thought he was singing "Sweet Caroline" but have since been told it was a Bob Seger song.

As for Monday, well, not a food day. Instead I went to the beach, slathered my self ten times with SPF 50, got well coated in sand immediately, and some how ended up burnt anyway sort of, only in spots that is.

So overall, a very successful weekend in my book. Only no one tell the nutritionist please. I am pretty sure that ribs and onion dip and ice cream and vodka and tacos and beer and turkeybasa are not part of a balanced diet.

Joyce said…
As part of the extended gazooki family, I am glad you and ET had a good time. Oh, yeah, those twenties that kept appearing--dadzooki shakes them up in the gimlet mix and they multiply--but don't tell anyone.
July 31, 2009 at 2:41 PM