You say poutine, I say fries and fricking GRAVY! Yah!!

November 17, 2010
Last night I met up with the lovely Pam of Cave Cibum for a second go at the Gallows.

The reason I say second go is because the first time I went to the Gallows I was completely sh*t-faced. So much so that I couldn't recall if I liked it or not, and that is saying something when fries and gravy are involved. But hey, a bottle of Goslings with your best friend will do that.

Also, I kind of have this prejudice against new South End eateries. My god they can be totally pretentious when they want to be and frankly the Gallows does seem to be hideously pretentious on the surface. The reclaimed barn wood interior, the faintly steampunk decor, the hip lightbulbs.... *eye roll* where are we? Brooklyn? Give me a break.

Well as it turns out I am the one who should have given the Gallows a break. True, the decor grates on my design sensibilities - only because I feel like it has been done, done, and over done. I mean, the big amber ball lamps in the bar area could have come from Linda Mae's circa 1982. You remember Linda Mae's, the stalwart pancake house on Morrissey Boulevard that is now a Chinese restaurant. They had AWESOME chocolate chip pancakes...

I was wrong about them. The staff was really nice, the drinks were subtle, and the "poutine" was delicious. Thank goodness for second chances, eh. 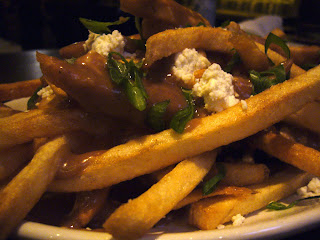 We also had bacon & caramel popcorn and those of you who know, know I cannot eat enough popcorn. The folks at the Gallows know how to make this the right way.  I could have, and would have, eaten ten pounds of the stuff if I had more money. 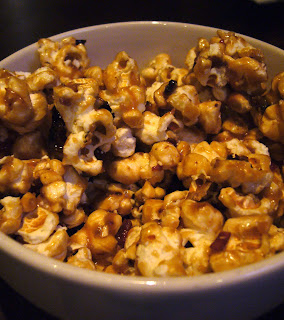 I am pretty sure I will go back, to the bar anyway! 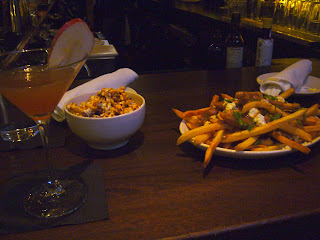