July 05, 2011
I tried to take my Irish friends to Mike's City Diner for breakfast this weekend and I really just should have known better. The problem at Mike's is that even if it's only 6 people waiting, there is some weird optical illusion in that place that makes it looks like 46 people are waiting.

We didn't want to wait.

And we didn't want to walk.

So we had breakfast at Toro. What an excellent second choice. First off the woman who was working our table was absolutely lovely, and second off the food was a pleasant surprise, in that it was delicious and not a giant huge plate of food.

I got the huevos rancheros and the corn. Who goes to Toro and doesn't get the corn? I don't know, that's who. 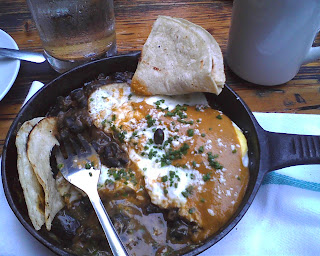 Anyway, sadly this is the only photo I got. I would have taken a photo of the corn but I was too busy chomping it down.


Also, if you go, get the banana milk with a shot of rum. You have to ask for the shot of rum, but it is SO worth it. It will transform your day into a day of glitter and unicorns and rainbows.

Unknown said…
I've only recently tried huevos rancheros - my reasoning is odd but I didn't want to have it be a bad experience! Anyways your plate of food is making me hungry!
July 6, 2011 at 10:35 AM