February 20, 2008
In the Restaurant section of today's Boston Globe, in a review of a shabu shabu restaurant in Allston, there is a line that reads:

Which made me throw up in my mouth a little.

I know what my hat smells like, and I shower everyday.

The idea of eating something cooked in the helmet of a sweaty warrior doesn't appeal to me at all. It's like that time I was watching a travel show on PBS and these intrepid adventurers were in Mongolia or somewhere and they were drinking horse milk mixed with blood out of a skin flask.

Right then and there I decided two things.

2.) If I ever go to Mongolia I will be bringing the biggest bottle of Valium you ever saw. Because I would hate to be rude and refuse the blood & horse milk flask - but I would have to be really really sedated to get it down. 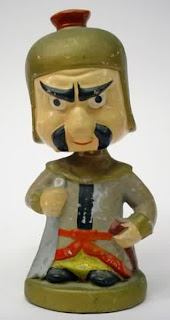