August 29, 2009
All week long I have had to keep it secret that the Evil Twin was throwing a surprise birthday party for her FH on Friday night.

Oh dear... I am bad at keeping secrets. Really bad. I would never have to be tortured. Just buy me a dirty martini and ask me politely and I will tell you whatever you want to know.

And guess what? I was making the birthday cake. Big shocker right? I know! And of course all I wanted to do was to write about it. But since I know he reads CSITK, he'd know.

So I had to distract myself by playing Van Halen and Frampton Comes Alive extra loud. Sorry about that neighbors. Well not really since someone over there listens to loud amounts of Brazilian disco pop.

Anyway. Wait. What was I talking about?

The ET planned a wine tasting dinner party for her beloved and in keeping with the theme I decided on a great big champagne cake.

It might be hard to remember today, but last week was sh*t hot. So why not bake a cake and make buttercream, right? Ha! Well I decided to make the buttercream first before the kitchen really heated up.

Buttercream is either made with powdered sugar and butter, or with hot sugar syrup, beaten egg whites, and butter. I personally prefer the latter. Not only do I prefer the taste, but I really like making it. For this recipe I made the sugar syrup with champagne & sugar, though in the end I didn't really taste it.

Because it was so revoltingly hot I had to put one mixing bowl in the fridge, while using the other one and then switch them out periodically. At one stage I was convinced it would never come together, but it did eventually.

The cake I made was a 10", two layer white butter cake that called for making a batter, then folding in egg white as the last step. Where the recipe called for the addition of milk, I swapped it out for champagne. Again, I couldn't taste it in the final result, but it did no harm to the cake which turned out pristine white and very light in texture. Then after it came out of the oven, I brushed it all over with more champagne simple syrup, wrapped it tightly in waxed paper and stuck it straight into the freezer 'til Thursday.

For both recipes I again turned to the Whimsical Bakehouse cookbook which has yet to fail me no matter how much I tweak their recipes to my own tastes.

Then on Thursday night I frosted the cake.

Let me tell you about this debacle. Because I had made the cake and the frosting at the weekend I had to bring everything to room temperature Thursday night. As soon as I got home from work, I put everything out and then went to sort out the various bits and things I would need for the decorating part - the sprinkles, tints, turntable, off-set spatulas, tips, bags, and luster dust.

Then the phone rang. It was Grandpa. He wanted to go to the emergency room. At 7pm.

Before you think I am a callous biyotch who is totally self-absorbed, let me explain that Grandpa now has 24 hour care as a result from his previous trip to the hospital earlier this summer which you can read all about HERE.

What happened was: he woke up, felt like crap all day, didn't say anything to anyone, and then called me in the evening. Instead of telling anyone during the daytime.

What he is supposed to do is call my auntie when he doesn't feel well and she will send the nurse over.

Seeing as how I actually really do love the old buzzard, I put everything back in the fridge and went over to see him. And I made La Maman come with me because I am mean like that. Please, I don't suffer lightly, or alone.

Fortunately it was a false alarm and we actually were able to get out of there around 9pm, instead of spending the night at the emergency room. Hooray!

End result is that I got back to the business of frosting the champagne cake a little after 9.

And here is how it turned out - an hour & a half later: 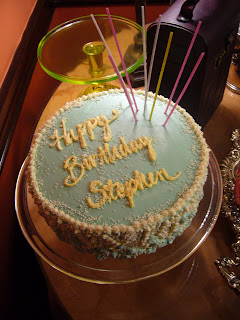 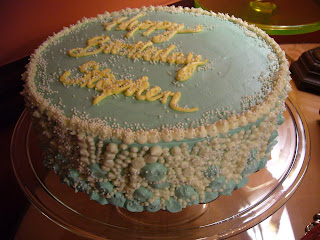 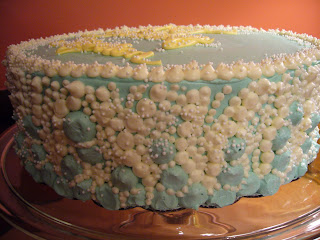 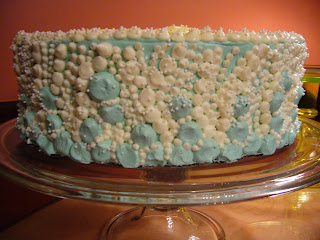 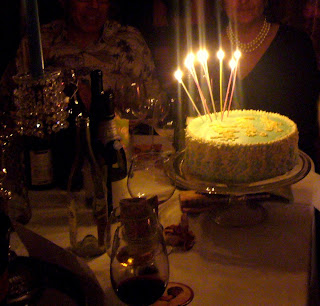 For the rest of the photos of the gorgeous dinner food that the Spruce Bruce whipped up, check out my Facebook page, or click HERE.

And if you ever need a cake let me know. I love making cakes. But you get to be on call for Grandpa. Just FYI.

Unknown said…
It was delicious!!! And it should be noted that Grandpa is fine - he was sorted out with a little cough syrup!