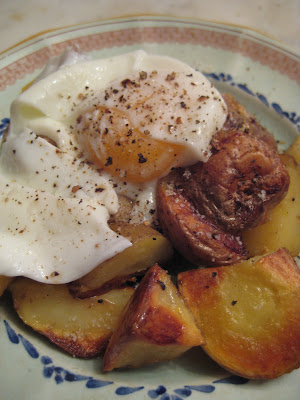 Today drained the energy totally out of me. I know what I am doing at work, just that some days I have to do everything all at once, oh and it all should have been done five minutes ago.

Five on the clock could not come soon enough. I trudged my sorry self home, until the end when I accidentally bashed my foot off the curb and hopped the last few feet, fueled by pain and f-bombs.

I was just too tired to make dinner and contemplated going right to bed with a cup of tea. Which is a terrible idea in reality, unless you have a sad-faced stomach and then a cup of tea is the best idea. As a compromise I made a dinner that required the same level of effort as making a cup of tea.

As you can see from the photo above, it was just potatoes and an egg. Big whoop.

A couple of chopped up potatoes, roasted them with a bit of olive oil in a 375 oven until soft on the inside and crispy brown on the out. Then I poached an egg, which is about the easiest way to cook a quick egg. Just bring a small pan of water to a boil and ease the egg in. Cook until the white is set and remove with a slotted spoon.  I like a runny yolk so if you don't you might want to cook the egg until everything is set. I do not recommend this though, as it seems to be a waste of an egg. Sprinkle the whole thing with a little bit of salt if you like, and a few healthy grinds of pepper.

Truly this was the simplest and most delicious dinner.

PS: It was done in time for me to eat it AND catch an episode of New Girl which was a pretty awesome end to a kinda grody day.
delicious DIY Farmers to You I made this useful things