October 18, 2009
La Maman's birthday was last week and there is only one kind of cake she REALLY loves - hazelnut dacquoise.

You might recall that I made a massive one at Easter, but now that everyone is dieting for the Evil Twin's wedding I was not about to make anything ginormous.

So I made individual dacquoise for her party.

Let me interject here that I am all about cutting corners when I cook, except when it comes to canning. But if a recipe has more than a dozen ingredients and steps, I look to see what I can cut out.

Therefore when it comes to making meringue, I kind of wing it. I get it that the bowl has to be oil free and the egg whites have to be at room temperature and that the oven has to be at just the right heat and you can't make them on a rainy day and all sorts of scary rules like that.

Which is just too much effort for me. I just whip up my egg whites a bit (hopefully I remembered to take them out early to get to room temp, and degrease the bowl and the whip, but chances are I didn't), add a big pinch of cream of tartar, then keep whipping until stiff, all the while slowly adding the sugar as I go. At the end I'll fold in chocolate chips, or sliced almonds, or in this case toasted, skinned, and pulverized hazelnuts.

Then I pipe it out, or blob it out depending, and bake it for an hour then turn off the oven and let them dry out.

I made two meringue rounds per dacquoise, but in retrospect I think three would have worked well also: 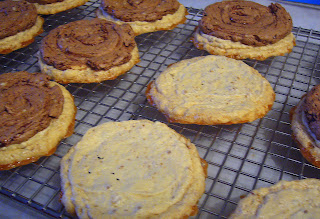 Piped out meringue rounds.
The poopy looking stuff on top is chocolate hazelnut mousse.
The thing with the mousse... Well let's just say that the first batch was a disaster, but not totally a waste. I should have just melted the chocolate into the heavy cream, then whipped it up the next day, and THEN put in the ground hazelnuts. But I didn't. Oh well. So it just never whipped up. So I added some butter and that sorted it out. Kind of. Because it really unfortunately looked like poo. 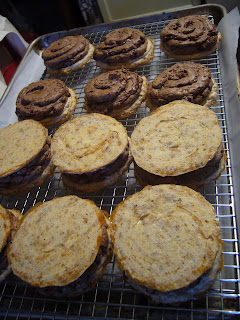 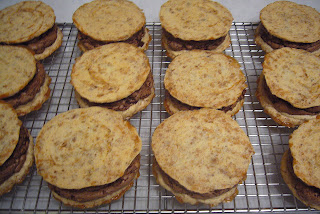 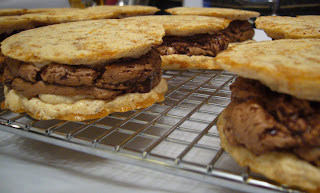 As you can see from the shiny brown bits in the meringue, I was a little sloppy in my meringue making.

Then I stuck the tray into the fridge to get them nice and cold before dousing them with chocolate glaze. 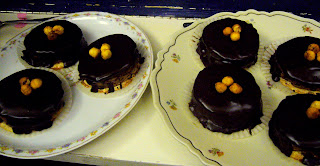 I promise you that this was pretty easy to make. It's all about chopping out the fussiness and adjusting for things that don't work out exactly.

Everyone liked it, and no one thought it looked like poo at all.