I forget completely that I have a blog, and anyway I get awful writers block from all the margaritas that I try to consume outside before everything frosts over.

So I think it was last week, or maybe the week before, but Pam of Cave Cibum, my friend Mademoiselle Bibliothecaire and me went to Anh Hong in Fields Corner.

I have unofficially been trying to expand my Vietnamese horizons past tofu spring rolls and chicken pho. It's kind of hard though. I love pho. I really love it. I love it so much that sometimes I dream about it. Great big steaming bowls of broth with shreds of chicken and cilantro and basil and noodles and sprouts and onion, sriacha & hoisin on the side.... It's 9am in the morning and I am already drooling over pho.

Well, so anyway, this time I tried something new. We actually had the spring rolls the traditional way with shrimp and pork. Blech. The pork tasted like meat flavored cardboard. Blech. I think though that it is definitely me, and not Anh Hong, because that is just not how I like pork.

Pam had the pho. And I had wonton soup (new favorite - friggin' SO SO delicious), followed byt the grilled pork on rice with a fried egg. Let me just state for the record that I thought I was ordering something else. But whatevs, thems the breaks in life.

And of course, I took some photos. The phallic one of the pork spring roll didn't come out, so lucky you, you are spared that image. 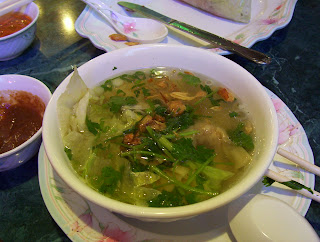 This is the wonton soup. When I say it is delicious, I mean it is DELICIOUS. When I dream about pho, this is what I dream is for dessert. If dessert was supposed to be savory and garlicky and delicious. 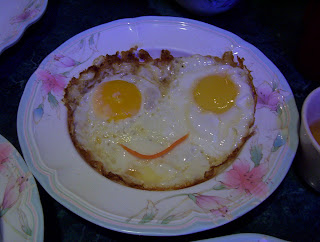 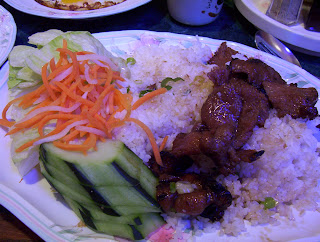 See, I thought this was going to be a pork chop, not pork chunks. But very good anyway. 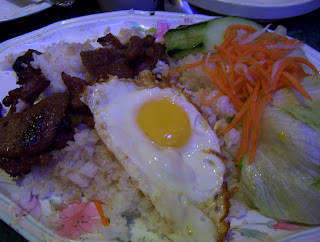 Even better with a fried egg on top.

And afterward I took the two of them to King Do to have a look where Mademoiselle Bibliothecaire bought a bag of soft durian candy.

On the ride home she opened the bag of candy and instantly the car was filled with the smell of durian which smells like really, really, low tide in a bay, with some rotting clams thrown in for good measure.

I ate one out of curiosity and now I think I know what it would be like to eat poop. Finally when Mademoiselle Bibliothecaire and I could stand the smell no longer, we stopped at a trash can and quickly threw the rest out.

So if like last week, or the week before, you were in Mission Hill and saw the BPD Homicide department rooting around looking for a rotting corpse, my apologies. It was just a bag of durian candy.