September 07, 2008
As you may know by now, or not, my all time favorite food writer is Laurie Colwin. I discovered her back in 2001 via Nigella Lawson's How to Be a Domestic Goddess. While none of the Domestic Goddess recipes quite worked for me, it was the Black Cake that caught my eye. Since I didn't trust Nigella's recipes, I sought out Laurie's original recipe, and well, the rest is history.

I think that I am going to cook my way through the rest of her recipes. I started with Lemons and Limes from More Home Cooking (page 22 in my version).

I agree with her philosophy that a lemon can fix just about anything. After the Christmas holidays I detox with big doses of hot lemonade and I can't imagine ever having to give them up.

So for the Lemon and Lime chapter I made Marmalemonade - a name I made up to describe how it tastes, which is a lot like lemonade. Truly this is a preserve that is worth the effort.

1. The night before zest the lemons - make sure not to zest into the pith (the white stuff). Put into a large (8 cups or so) non-reactive pot.

2. Carefully slice away the pith (the white stuff). This job is made easier by cutting off the ends of the lemons and standing them up.

3. Slice the lemons down the middle. I usually cut just to one side of the center, and then pull out the white bit in the middle.

4. Pop out the pips. Make sure to save the pips in a separate little dish or glass.

5. Chop up the lemon fairly thinly and put in the pot with the zest.

7. The next day (or after four hours) dump the fruit and water into a large saucepan. And here is the tricky part. You need to strain the pips water into the saucepan and then tie up the pips into a bit of muslin or cheesecloth and let that hang into the mix. Honestly, I just used a well rinsed out cloth dinner napkin and tied it to the pot handle with string because I never have cheesecloth in the kitchen. Or trussing twine come to think of it...

8. Turn the heat on high and bring to a boil. When it's boiling, turn down heat, cover and let simmer for about an hour.

9. At this point I got my pots ready. I washed six 1/2 pint jars and sterilized them. And left them in a boiling water bath.

Let me just state here for the record: I AM A NOVICE CANNER. GO TO THE NATIONAL CENTER FOR HOME FOOD PRESERVATION FOR PRECISE INSTRUCTIONS. Having said that however let me just also point out that it seems more complicated than it is. I promise that once you've done it, you realize that it's a pretty easy process.

10. After simmering for an hour, remove the pips bag and squeeze out the last remaining bits of liquid. I squeezed the bag between two spoons because the bag was HOT.

11. Pour in the 4 cups of sugar and stir to dissolve. At this point I added some powdered ginger for no other reason than because I thought why not.

12. Bring the heat up and boil until the temperature reaches 220 (at sea level). Here is the deal - lemons have pectin, but if you cook it too long the sugar caramelizes and the marmalemonade gets thick and sticky and gooey and dark in color. Most recipes tell you to cook it at this stage for 40 - 60 minutes, but that's a little long I think. I cooked it about 20 minutes at a gentle boil, then I put up the heat and got it to 220 as fast as I could.

13. When it gets to 220, take it off the heat, ladle into the drained jars (I ended up using 5, but better to have one more than one less), attach the lids and the screw bands.

15. After 15 turn off the heat, remove lid, wait five minutes, and remove to a rack. Let cool completely, but out of a draft for even cooling ok.

One thing though, at the beginning I say to zest the lemon. But you can also carefully peel the lemon (just the yellow, not the white) and then sliver the peel in proper marmalady-like shred. Which is what I did for this batch and it took FOREVER. Ten lemons is a lot of lemons.

And I think that is about it. 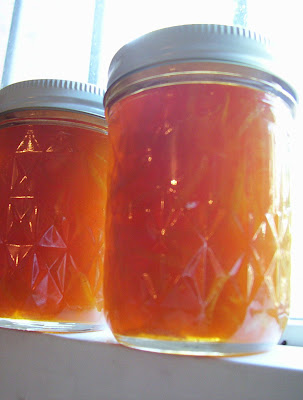