Cheap Eats on a Monday Night

For some there is perfume while for others there's Designer Imposters. Some people want imported mortadella, while others settle for bologna.

When I talk about cheap eats, I usually mean it is cheap relative to the place where I am eating. Because otherwise a cheap eat will always be the dollar menu at McDonalds.

One of my all time favorite eating companions is Pam from Cave Cibum. And tonight we cheap ate at two South End restaurants. There are definitely cheaper places to eat, but for the South End, these were considered cheap.

The first place we hit was Pho Republique. I ate there years ago when they first opened, before I realized that I could get the same thing cheaper in Dorchester - pho at Pho Republique starts at $14 a bowl. But you know, you gotta start somewhere.

We went for the "Two Dollar Dim Sum" menu which is no where to be found on the website, so I took a photo of it for you: 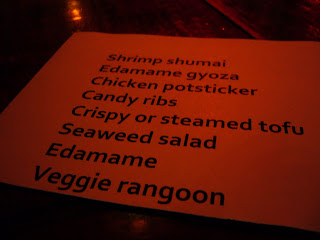 We ordered one of everything except for the seaweed salad, which despite numerous attempts to like, I haven't managed yet.

The one of almost everything platter looked like this: 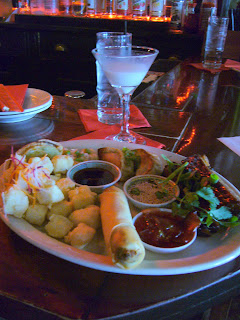 Ok so here is the platter from another angle: 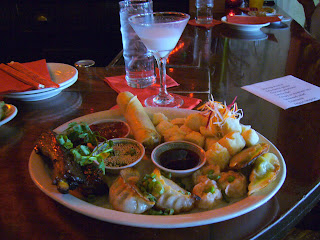 Not on the two dollar menu was the cocktail, a coconut martini. Which was delicious - like melted coconut ice cream alcohol. Oh and also the bartender is the most lovely person ever. Her name is Emily and she has that kind of easygoing personality that is rarely found on Mondays. 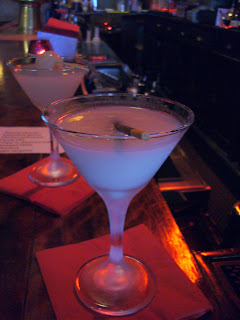 My favorite item, after the coconut martini, was the candy rib. I really believe that meat and sugar belong together.

After absorbing as much almost passe trendy hipsterness as we possibly could, we bid farewell to Emily and headed out to Sage.

Which is about four shops down from Pho Republique.

If Pho Republique is the red satin sheets in the bordello, then Sage is the Frette sheets you nicked from that fancy San Fran hotel.

I have often wanted to try Sage, but it's a little out of my price range. However, they now offer a deal on the stuzzi menu - from 5pm to 7pm (or so) you can get three stuzzi dishes for ten dollars. Which frankly it is the only way I can afford to get in the door. 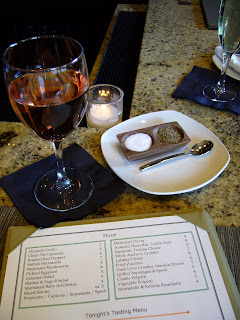 We each picked three dishes, Pam got a cocktail, and I got a glass of rose. Let me state two things for the record: 1) I have always liked rose wine. I did not just jump on the rose band wagon this year. And 2) I can never ever remember what drinks Pam got. Not this time, not anytime we've been out together. Weird.

Side note: The menu they have online is NOT current. Argh.

As you can see, stuzzi is mostly fried. Not ordinarily a bad thing, but it sort of overwhelmed me, especially after the Two Dollar Dim Sum. The standout dish for me was the chickpea caponata which was delicious. 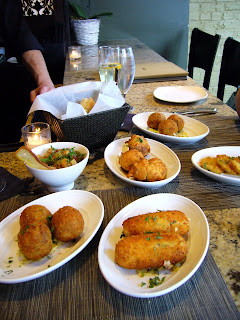 As you can see, we made a pretty decent dent. 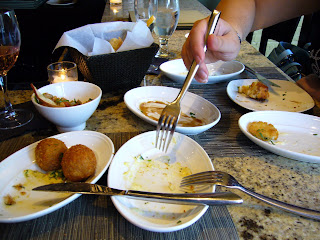 (Is it me, or do those arancini look like testicles? It's me, I know it. Sorry.)

The bartender is a nice guy by the name of Samuel. He definitely appreciates food and is not in the least bit snobbish or pretentious, which is pretty remarkable since he is not only working in the South End, but also really good looking. If you have any questions at all about the menu, just ask him. He was very good with the explanations.

I did like Sage overall. It's tough because I don't like to say anything about how someone else runs their business, because what the heck do I know. But I do get the feeling that Sage could make a few changes to the menu and to the dining room that would bring in more people. Maybe they don't need more business, but there is something about the dining room and the menu that didn't quite rhyme to me. Maybe it was the artwork on the far back wall? I don't know. I am not going to think about it anymore because it is not my restaurant. But I did like the food and surprisingly all that fried food wasn't greasy.

The other thing I liked about Sage was the view. It looks out at the cathedral, which changes perspective depending whether you are looking at it from the street outside, or from inside the restaurant, framed by the restaurant windows. 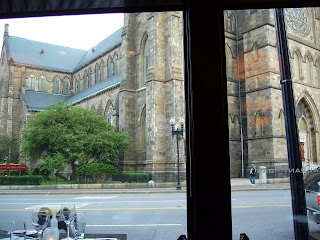 The other thing I love about the view is the play of light on the brick buildings, there is a certain warmth of the sun on the brick when the light hits the building at a certain angle. 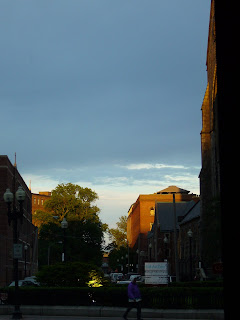 Overall I might go back to Pho Republique for the coconut martini and a candy rib. As for Sage, well I won't be back for dinner because I can't afford it. But I am likely to go back to the bar for another glass of wine and maybe try out some of the other stuzzi.