June 17, 2009
As some of you might remember back in December I hosted a round of Operation Baking GALS. The fantastic members of Team Calamity Shazaam sent nearly two dozen boxes of cookies to SFC Kevin Dupont who was stationed over in Afghanistan. 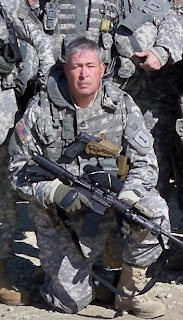 Even though the boxes arrived in time, Kevin had been out on a mission until January. However, according to Lisa (his wife) the cookies were mostly intact by the time he returned and were well enjoyed!

Sometime at the end of February, beginning of March Lisa came by the office to say "Hi" and we were chatting about how she was relieved because she had finally heard from Kevin after not hearing from him for several weeks. She played a voicemail from him and we giggled like schoolgirls because it's love and it's goofy and it's a relief to hear from someone you love so much after not for so long.

But war and things military being as they are, a few days later I got a call from Lisa's boss who told me that Kevin had sustained severe burns in an explosion. An IED had hit the truck he was in, killing another soldier. And that Lisa was on her way to be with him.

It was totally shocking. Which honestly seems absurd. In war how can anyone think that everyone will be ok? No. People don't always make it. And even though I think Lisa is such a wonderful human being, simply thinking that nothing bad should ever happen to her because she is such a great person doesn't make it so.

Un-f*cking fair if you ask me.

Kevin has spent the time since March at the Brooke Army Hospital in Texas trying valiantly to recover. Lisa has nearly daily updated his online journal, even early this morning she shared that Kevin was due to receive the Bronze Star this morning. Sadly a family friend later updated the journal to note his passing at 9:14am. Geez I still can't quite believe that he succumbed to his injuries. I really, naively believed he would make it.

So say a little prayer or whatever you do for Kevin Dupont, his wife, and his whole family at this sad time, and raise a cookie to toast his life and to the lives of all the people who serve this country of ours.