October 05, 2010
After wandering around the Local Food Fest on Saturday with Tammy, we wandered over to the North End where our last stop - after Bova's, Polcari's, and gelato - was DePasquale's on Cross Street.

I just could not resist the insistent tug of the ravioli and wound up going home with two kinds: roasted garlic, and mushroom. I also picked up a pint of their ragu alla bolognese and chunk of cheese for grating.

Most of the time I don't love bolognese, usually it's far to wet and tomatoey for my tastes, and made with hamburger. The stuff I got at DePasquale's was just right - dry, meaty, and delicious.

Much to the horror of Italians everywhere I am sure, I had it over the garlic raviolis last night for dinner and  it was so good. So, SO good. 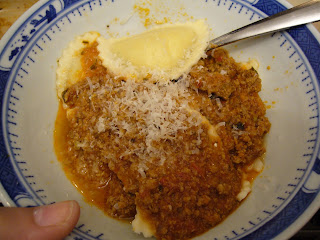 I guess that means mushroom raviolis are on tap for tonight!
local