October 04, 2008
With this chilly weather upon us all I want to do is cook - I want to bake bread, and make stew, and watch the leaves fall from my kitchen window while curled up in a chair with a strong cup of tea.

Last night I made baked beans two ways and was rewarded this morning with a warm kitchen and a wonderful smelling house.

Why did I make beans two ways? Well for one thing I totally misjudged how much water 2 pounds of soldier beans would soak up. Two pounds of beans really looks like nothing when they are all dried up at the bottom of the bowl. But after eight hours of soaking I swear they more than doubled. 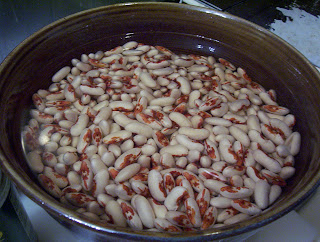 But fortunately I have two bean pots. Really I have three, however I think I left the ancient one at my parents house and La Maman was way too busy yesterday to root around for it. 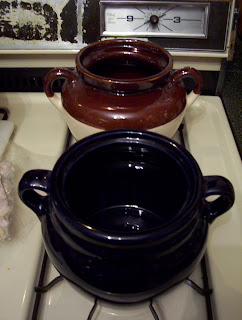 Anyway I decided to use up what I already had on hand, instead of schlepping out to the shops for recipe ingredients. Basically the rule of thumb for baked beans is to soak the beans for at least eight hours, put the soaked beans in a bean pot, put in enough water to just cover the beans, and bake in a very low oven overnight.

That seems to be the technical recipe. But of course you want to season them and however youo decide to do that is entirely up to you. Baked beans are a very democratic dish. For my pots I decided on one vegetarian pot, and one not. 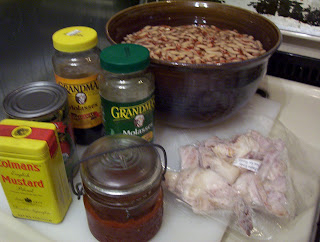 In the crappy photo above are all the ingredients. Finally I was able to use up all the molasses ends and I found a package of smoked bacon ends at the bottom of the freezer. The ball jar at the bottom of the picture is chipotle pepper in ancho - however being a Yankee I am not entirely sure what all that means except for that it is spicy and smoky tasting. The Colman's mustard is used because allegedly it prevents the "snappers" and of course the soaked soldier beans. 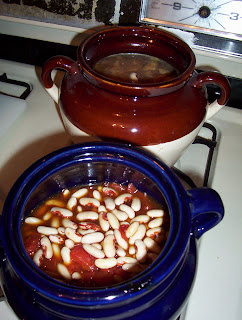 Blue pot: 1lb soaked soldier beans, one can drained chopped tomatoes, 1/2 cup molasses, 1 tablespoon ancho chili sauce with bits of chipotle in it, 1 tablespoon Colemans mustard, salt, and pepper. Possibly I also put in a little brown sugar, but I don't think I did. Add enough hot water to just cover the beans. Pop the cap on and put in very low oven overnight. 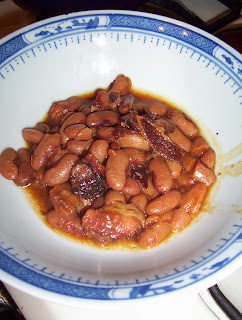 This is what I had for breakfast - bacon baked beans.

Let me also reiterate that baked beans are so easy. Make them with ingredients you already have. If you don't have molasses, use extra brown sugar. No bacon? Then leave it out. Maybe I wouldn't make them with sardines or with lavender, but pretty much everything goes.

Annabelle B. said…
I will say that the beans are now even MORE delicious than they were this morning.

And you know, I was told once that if you bake beans in a cast iron pot, you need to add a little more water than if you do it in a pottery pot. Old wives tale maybe.

I used Baer's beans, and the bacon came from Stillmans farm. FYI since you are trying to eat locally.
October 4, 2008 at 4:44 PM

Mary said…
I happen to have an exact replica of that brown bean pot. My grandma gave it to me. And I was all drooly over your beans until you mentioned lavender. That killed it. Whew. I was going to have to stop sulking around in my pajamas and make some.
I'll probably make some tomorrow.
October 5, 2008 at 7:50 PM