October 27, 2008
And this is good old Boston,
The home of the bean and the cod,
Where Lowells talk only to Cabots,
And Cabots talk only to God.
-John Collins Bossidy

Pam from Cave Cibum and I went on Ye Olde Food Tour of Boston - an event we just thought up to amuse ourselves. In truth I think that I like the idea of Ye Olde Boston food better than the reality. The reality seems to be mostly sh*tty tourist food, with a few nice surprises.

We started at Fanueil Hall/Quincy Market, at Durgin Park. Durgin Park is a Boston institution that natives talk of fondly but only tourists eat at. 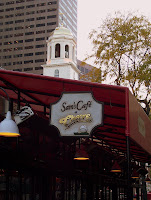 Durgin Park signage on the left. Across the way is Sam's Cafe at Cheers. This is a complete Venus-Tourist-Flytrap. Cheers is a fictional Boston bar. Sam Malone is imaginary. It ought to be illegal for non-tourists to go here. 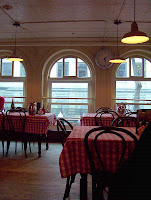 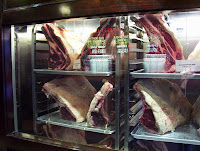 The dining room at Durgin Park. And the downstairs meat locker.
The dining room is shabby around the edges and there is a great big open kitchen. The waiter decided that Pam and I were a couple of aliens. We ordered a cup of chowder, a small baked beans, a side of cornbread. 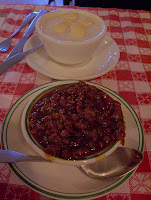 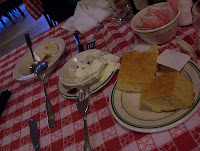 Beans & chowder & the remains. The bean were good, sweet aftertaste and no salt pork bits that I love. The chowder was also pretty good. The cornbread was blech. Bland and dry and blech. 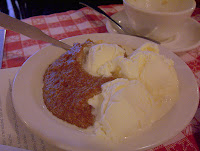 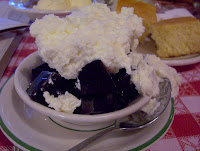 We then ordered the Indian Pudding and the Coffee Jello.

The Indian Pudding was delicious. It was exactly what Indian Pudding ought to taste like. It was served hot with creamy rich vanilla ice cream and had a deep molasses flavor. I love molasses and have been known to eat it directly out of the bottle, one sticky tablespoon at a time, so I am biased. If you don't like the taste, this is not the dessert for you.

As for the Coffee Jello... Well as Pam remarked, it was pretty much astronaut coffee. It was like no other jello I've ever eaten. It was completely peculiar. You could eat it with a knife and a fork. The jello itself was unsweetened, but the dish was piled high with super-sweetened whipped cream - like a regular coffee only jellofied. I equally liked it AND loathed it. Weird. That stuff is weird. 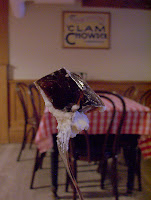 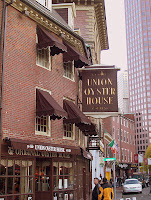 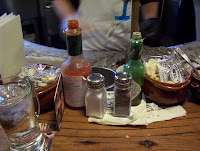 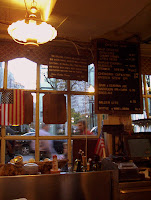 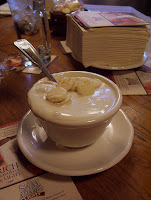 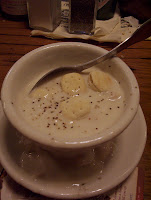 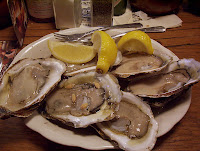 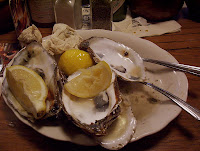 We had chowder, and I had a plate of mighty oysters from Connecticut. They were oyster monsters and totally delicious - briny and tender. The oyster bar there is gross though. They have a fly problem and the dishes are dirty. Stuff like that doesn't really bother me, but if you are delicate, you might not appreciate it.

Oh and Tedy Bruschi (#54 Linebacker for the New England Patriots) totally walked in with his wife to have dinner there. Weird, huh. Not coffee jello weird though.

After which we strolled up to Cafe Marliave which re-opened about a month and a half ago. I am in love with that place now. I don't think I could afford to eat in the upstairs restaurant, but I can likely afford the downstairs restaurant, and their oyster bar.

Sadly for us we were sort of Ye Olde Boston food-ed out, but at that point we were ready for a cocktail. 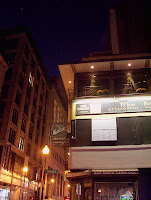 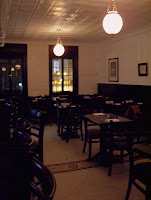 The interior. It has been redone, but not thankfully not overly redone. There are still some shabby bits which add to the ambiance, and they kept the tiled floors which I love.

The fancy drinks menu is different and delicious and $10 per drink. Our very nice bartender Robbie informed us that they offer happy hour from 5-6:30 with free nibbly bits from the kitchen. And Robbie is an excellent bartender - he is very personable and it is clear he likes where he works. Which is probably what will get me to go back, because if the employees are happy, something is working right. 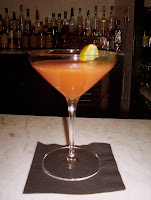 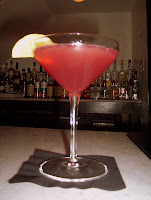 Mmmm the Molasses Flood 1919 on the left and the Henry Marliave on the right. The Molasses Flood is made from Sailor Jerry's rum, molasses, lime, & bitters. It was so good. Again, let me just remind you that I could probably drink a bottle of molasses so I am biased.

The Henry Marliave is concocted of vodka, Lillet Blanc, Chambord, and a little float of bubbly. Both good, but I really want another Molasses Flood. And I want a set of those drinks glasses.

I can't wait to eat there either. The menu looks great. And the Rarebits smelled soooo good - cheese and bacon and beer, oh my! 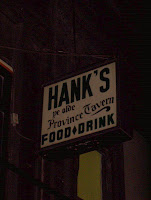 Old sign. Sorry - YE OLDE sign. We passed it on the way up to the Omni Parker House for Parker House rolls and Boston Cream Pie.

I am sad to say this was the big disappointment of the night for me. I love Boston Cream Pie. It is my favorite cake, even if it's not really cake. I love it.

And my step-grandma, and light of my childhood life, used to make Parker House rolls from Pepperidge Farm in the toaster oven and I could eat them by the tray load.

So that's what we ordered - a plate of rolls and a Boston Cream Pie. 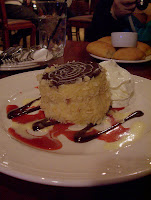 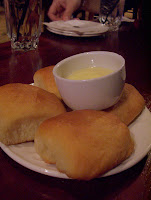 First of all what the HELL is with the slivered almonds pressed into the sides of the cake? They're not supposed to be there and they are not wanted. After spending the day in the fridge they tasted a bit flabby. And the chocolate frosting was cold and hard so when we tried to cut into it the whole cake sort of flattened and smoodged. I will conceded that the pastry cream was ok. But the red syrup that decorated the plate was vile. Eh, the whole affair was somewhat flabby, right down to the whipped cream that suddenly melted into the plate.

And the rolls were greasy and that odd kind of mealy that makes me think that they would disintegrate instead of mop up any kind of sauce.

I was really sad about that. I expected more from the Omni Parker Hotel.

Perhaps these ancient institutions of Boston have no incentive to hit higher marks since tourists are their bread and butter, so to speak.

Why should Durgin Park try to be anything other than a Fanueil Hall tourist attraction? Who else would go? Faneuil Hall is for tourists anyway. And what is the incentive for the Union Oyster House to clean up? The tourists are going to stream in in steady waves anyway. They don't have to rely on repeat customers, because the tourist business is a mostly one time deal. I will say however that I will probably go back. I liked sitting elbow to elbow at the oyster bar and talking to people.

In the end though, Cafe Marliave, in my opinion, that is the way to go. Renovate and renew and revive without trading in every last shred old world charm. Give the customers just enough to remind them of the good old days, but drag the menu into the present - that's how to keep everyone happy.

And so this episode of Ye Old Boston Food tour comes to a close, but there is definitely around two in the future.
Boston local tourists

La Belle Esplanade said…
Caught your report via Universal Hub. I've never heard of the Marliave, but I'll have to check it out. I've known of the others but never been tempted. Thanks.
October 28, 2008 at 5:45 PM

Rhea said…
Sounded like a great time! I adore the Durgin-Park Indian pudding. I have the recipe and make it home. Of course, it's not as good as the stuff you get at the restaurant.
November 3, 2008 at 1:45 PM

Annabelle B. said…
Whalehead King: I highly recommend the Marliave during the week, like Monday or Tuesday. Not too busy, and fun to sit at the bar.

Pam: We really need to sort out Round Two.

Rhea: I think the difference between homemade and restaurant style is that they probably still use the same ancient pans to make it! I find that the stuff I make at home is always improved with the addition of more molasses.
November 9, 2008 at 1:12 PM