Operation Baking GALS: Round 2 v.2 and Round 3

October 06, 2008
Since Friday I have felt like toast. I think that I ate something that didn't agree with me and as such spent most of the weekend close to home and then yesterday I started to feel a little hacka-hacka.

Although that could be eggplant related.

So this weekend was Round Three of Operation Baking GALS. To be honest, I just didn't have it in me to bake sweets. This weekend I only cooked stuff that could be thrown in a pot and left to its own devices while I napped. If I could have shipped a lasagne, I would.

Then today I found out that my Round Two package had a total delivery failure, which according to those in the know means that it got run over. Or as my source said "runned over".

However I refuse to let down Team Doughmesstic so today I hit up the candy aisle at the shiny new CVS that just opened.

And what fun that was!

Since I had to make up two boxes, I bought two of everything, just to make it fair to the recipients. Although there is no amount of candy to replace the satisfaction I get from the actual baking process. 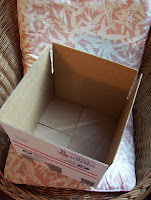 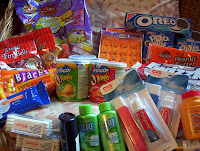 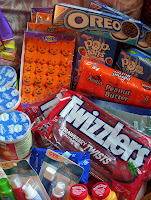 I have to say something here - those dang Peeps are frickin' made outta crack. Seriously. SO good. Made out of crack and then dusted with crack for added deliciousness. Crack! 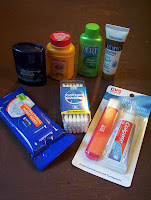 Miscellaneous toiletries because to be perfectly honest, I really love shopping in the travel size aisle. Although I can't explain the rhyme or reason here - the Gold Bond was an impulse purchase really because the teeny bottle is so cute! But otherwise are any of these items even useful? 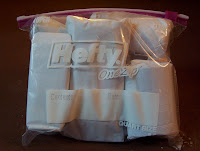 Oh and yeah, I am a big dork because I wrapped EVERYTHING individually in tissue paper, like a Christmas stocking. And because face it, it is fun to unwrap presents. I put all the toiletries in a Ziploc just in case they all burst. 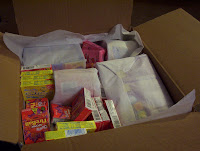 And then I scattered little boxes of candy through out.

I went to the post office and mailed the whole shebang off.

But I am definitely baking for Round Four. I still can't shake the feeling that I sort of gypped myself this Round.