And I will say that for 93, he is still going strong, except for the mobility part which is a little slower than in the days of yore.

We took him to Cafe Marliave. I went on Monday night for drinks with Pam of CaveCibum and I was already ready to go back. So I persuaded everyone else to go along with the plan, and off we went.

Grandpapa had been to Cafe Marliave once before. Oh back in 1947. Yep. He used to work on Bromfield Street and had eaten at the old cafe back in the day.

Of course the food was delicious. We ate in the downstairs restaurant, and once again I went with the Molasses Flood cocktail. Just as delicious as the first time. Grandpapa also had one, while La Maman went with the Henry Marliave, the Evil Twin opted for the Jenny Churchill, and her B-b-b-boyfriend had a Henry Marliave too. And we opted for a bottle of red wine that was gorgeous.

A large plate of olive oil with fat and juicy olives comes with the bread basket, and that was some delicious olive oil. It was sheer force of willpower that slowed me down. That, and the prospect of dessert afterward... 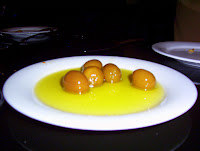 Let me also just state now for the record that my camera has suddenly developed farsightedness. Boo :(

Then we moved on to appetizers: 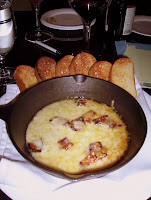 I went with the Rarebits. Grandpa insisted it should be called "rabbits" and as he is the birthday boy, I went with it. Basically this dish is composed of melted cheese and bacon. I believe it might also include a splash of beer. It is served with rounds of toasted bread, I think it was brioche, and it was impossible to eat slowly. SO delicious, if you like cheese and bacon melted together. 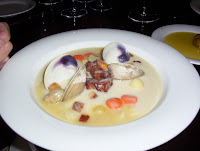 Grandpapa got the Clam Chowder. Let me explain about the Clam Chowder - first a shallow bowl is placed in front of you and all that is on it is two clams, some hearty chunks of fried bacon, chopped carrots and potatoes. And you say to yourself, hmmm, where is the cream? Then right behind you an arm stretches around and pours a creamy delicious dose of the chowder into the bowl. Heavenly! It's all clam and cream and bacon and delicious. At $12 a bowl, it is worth it at least once in 93 years. 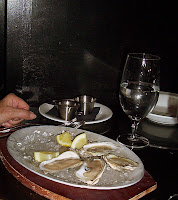 La Maman went with four Cranberry Ledge oysters from Maine. They must have been good because I don't remember her eating them. They were there one minute and then gone the next. La Maman and I share a lust for bivalves that is unmatched in our family and so I think going back for more is as good a reason to go back as any.

The Evil Twin opted for the mussels and the B-b-b-boyfriend went for the tomato and mozzarella salad. I didn't get photos, but I am told the mussels were very tasty. I sneaked a taste of the mozzarella and it was very good - soft and exceptionally fresh tasting. 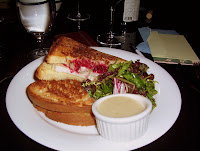 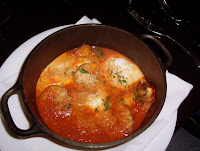 For dinner I had the Fall Classic which is basically a Pilgrim sandwich done right. It was layers of turkey, cranberry sauce, and mashed potato on toasted brioche, served with a side of gravy. It also came with a side of french fries. The french fries are handmade. Crispy and savory on the outside and soft on the inside and not at all starchy. I could only manage half, sending the other half home with Grandpapa - partly because I was full and partly because I was holding out for dessert.

The B-b-b-boyfriend had the eggplant which he seemed to like. It looked like it was eggplant and lots of melty cheese and tomato sauce - served in a cast iron pot. 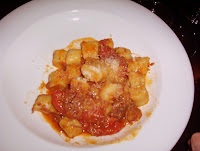 Everyone else (Grandpapa, La Maman, Evil Twin) went with the Sunday Night Gravy, which was gnocchi and meat sauce. It looked delicious and for some reason I didn't get to taste that either. 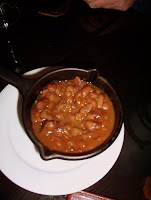 Oh yeah and the B-b-b-boyfriend proved that his good taste is not limited to his love of my sister, but also extends to a love of baked beans. If I ever doubted his suitability, those doubts are certainly gone now!

In the end however we did not get dessert. Grandpapa was suddenly very tired so we decided to skip it. Hey, he is 93 and it's his birthday so he gets to call the shots. Plus we sent him home with all the leftovers.

And at any rate my auntie is coming up for the weekend and I think that it will just be more fun to extend the birthday festivities into the weekend and have cake for him then.

Which also just gives me another reason to go back to the Marliave: dessert!

That looks like my kind of place. Who doesn't like cheese melted with bacon? And that chowder bears a striking resemblance to my own.
October 30, 2008 at 8:53 PM

Annabelle B. said…
Tammy: Melted cheese, bacon, and a splash of beer is considered medicinal I think. Whenever I have a dose, I feel MUCH improved. Oh, and if you make chowder like that I will come over with my own spoon, thanks! :)
November 9, 2008 at 1:07 PM