I am tipsy and I blame the Black Cake.

November 01, 2008
Well face it, Black Cake time is drinking time. And today is November 1st and I was feeling sort of productive and completely not NANOWRIMO ready so what the heck, I started the Black Cake.

Oh, and I made mincemeat, and a very large chocolate-chocolate chip bundt cake for Round 4 of OBG/Team SugarBakerz Sweeties.

Yes, as per usual, drinking was involved. 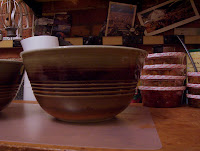 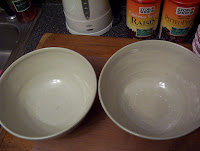 First of all I want to show off my mixing bowls. One of my wonderfully talented aunties made it for me. She is a brilliant potter and I am very, very lucky indeed to be a recipient of these creations. The ones shown above are so sturdy, yet so delicate and thin. They are my go-to kitchen bowls.

This morning I went to the local supermarket to get the fruit. For some reason this morning when I woke up I had the thought that this year I am going to make mincemeat tarts for Thanksgiving, among other things. I don't have any idea why this idea popped in my head, or why I want it for Thanksgiving, but it did and I do, so why fight it?

I hate chopping fruit, but I like Black Cake more.

At least when I was getting the Manischewitz I also picked up some Mayflower Golden Ale. Not only do I love Black Cake, but I love local beer. Especially Ye Olde Beere. From the days of yore. The Golden Ale is the perfect beer to quaff while cooking - it's light and very easy to drink.

Ahh behold the beautiful bottle. And no, it's not at all dangerous to chop sticky fruit with a great big knife while drinking beer. It's why we've got plenty of fingers to spare. 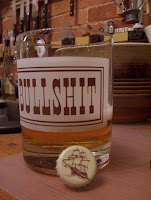 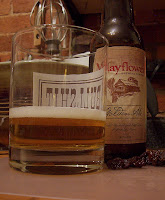 Do you like my beer glass? I got it at the Goodwill. And that's not bullsh*t.

Ok, so back to the fruit chopping. 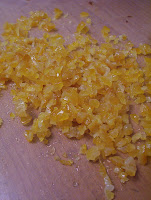 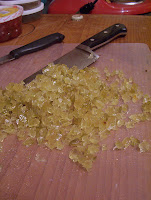 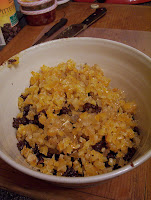 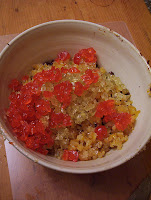 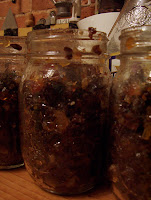 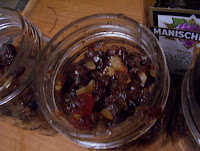 And then I put the chopped fruit into quart jars, being pretty careful not to pack the jars too tightly. 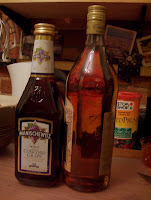 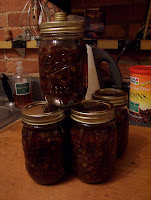 Then I filled each jar with half Manischewitz and half dark rum, capped them and up onto the top shelf with them.

And then I had more beer.

The mincemeat was more of an experiment. You know what? It's hard to find a recipe for mincemeat. Every recipe either directs you to commercially prepared mincemeat (which was running about $7 a jar in the market today), or is some weirdly complicated recipe that involve boiling beef for two hours.

Then I chopped up an apple and added it, and then chopped up some slivered almonds and threw that in. I added three scoops of brandy-soaked currants that I've had sitting on the shelf since last year, or maybe the year before, and a scoop of the brandy.

At the last minute I remembered that I should add some spices, so I mixed together ginger, cinnamon, nutmeg, cloves, allspice, and something else but I forget what.

And blended the whole mess together. Then packed it firmly into two quart jars with a little left over. I did eat a little on a spoon, and it tasted pretty ok. I think it will taste even better in a couple of days. Which hopefully means it will be perfect by Turkey Day. Or it will be rancid. Whichever.

Actually I think that I will probably eat all the mincemeat slowly over time before I even ever get around to making the tarts.

I will however keep you posted.
black cake local obg thanksgiving