Lazing on a lazy afternoon

November 08, 2008
Soooooooooooooo I've been lazy today. It was gray day which made all the leaves saturated in their own color and that was pretty distracting. 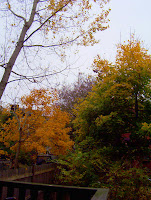 I tried pretty hard to clean up the house and that went well enough until I gave up entirely to go get pho and beer. On the way I stopped at LiquorLand because for some reason I really wanted a cold beer with the pho.

And look what I found! 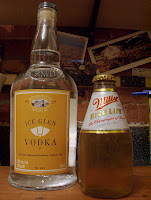 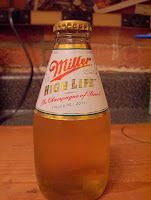 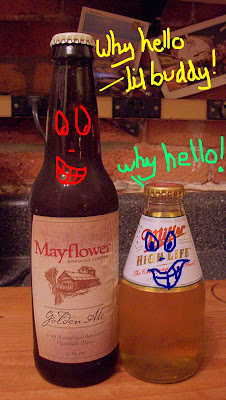 Then I decided to make Concord grape jelly and also some apple butter. I really should drink less beer and eat more fruit, but until then I'll just cook it before it really rots. 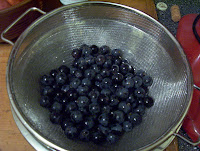 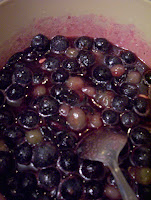 I had about half a container of grapes in the fridge. I stemmed them, rinsed them, weighed them, then put them in a pot with 3/4 weight of sugar. And a few squirts of lemon.

Then I cooked them over medium-ish heat, stirring and popping the grapes against the side of the pot. I have to say that it smelled gorgeous, but then again I love the smell of grapes.

After about 25 minutes or so, I pulled them off the heat and pushed them through a strainer. The result went back on the heat for about another 25 minutes. 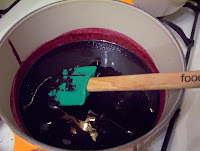 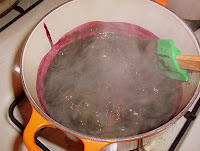 Personally I think that this color is awesome. I want to color everything purple, it looks lovely and tastes lovely too.

After it came to a second boil I took it off the heat and jarred it. Yes, I definitely burned my tongue tasting it for, uh, well uh scientific purposes.

Next up was the apple butter. I bought a bag of apples thinking that I would use them up for my mince project last week. But I really only just used one, or wait, maybe two and then of course I thought I would have one every day with my lunch. Whoops, not this week. 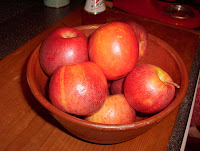 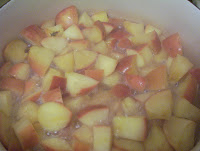 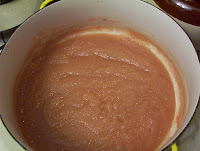 Currently the apples are still cooking. I have a perforated metal flame tamer and I have to say that a flame tamer is a kitchen must. I just put the pot over a fairly low gas flame and just leave it to burble away until it turns dark brown.

When it gets a little caramelly looking, I stir in a little cider. And my house smells fricking good.

All in all a rather satisfying lazy day.
apples beer grapes jam local

Annabelle B. said…
Mary: Sad to say that there is none left. Well that is a lie - I gave my mom one since it is like crack to her, and I already ate the other. :(

But I plan to make it again because it is easy and delicious and I will make sure to send you some!
November 9, 2008 at 1:02 PM